The evolution of the Siren Join plugin

The Siren Join plugin was built two years ago, initially to perform a semi-join between Elasticsearch indices, and has evolved organically since then. While it has been doing a good job in many scenarios, it has limitations: 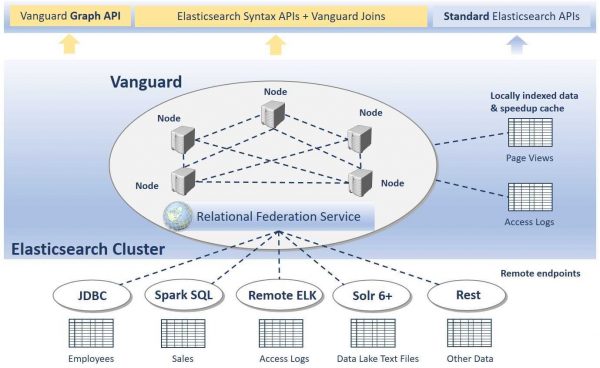 Our core requirements for Siren Vanguard are:

This initial release of Siren Vanguard includes an implementation of the original Siren Join algorithm, but in general it provides better performance and caching than Siren Join in many scenarios. The next release of Vanguard will include a fully distributed join algorithm that will enable horizontal scaling. We will also release a comprehensive set of benchmarks to demonstrate its scalability.

Vanguard is free to use also for commercial purposes for up to one data node in your Elasticsearch installation.

For cluster deployment, a commercial licence is required, priced per node.

The whole architecture is available on our Customer Portal.

Please, let us know what you think about Siren Vanguard on Twitter, for any inquiry feel free to contact us at info@siren.solutions. In the meanwhile, make sure you’re signed up to our Newsletter to be always informed about updates and new releases.

Import CSVs & spreadsheets into Elasticsearch ( ...to build a knowledge graph!)

Cyber threat hunting and discovery with Siren link analysis: The tale of GoScanSSH, GandCrab (and then some)